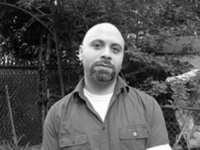 The Creative Writing Program celebrates the 20th anniversary of the MFA program. Graduates of the first fiction class read from recent books.

Samuel Ligon is the author of Drift and Swerve, a collection of stories, andSafe In Heaven Dead, a novel. His new novel, Among the Dead and Dreaming, is forthcoming in 2016. His stories have appeared in The Quarterly, Alaska Quarterly Review, Prairie Schooner, StoryQuarterly, New England Review, Post Road, Keyhole, Sleepingfish, Hobart, Gulf Coast, New Orleans Review, and elsewhere. His essays appear monthly in theInlander. He teaches at Eastern Washington University in Spokane, and is the editor of Willow Springs.

Robert Lopez is the author of two novels, Part of the World and Kamby Bolongo Mean River and two story collections, Asunder and Good People, published by Bellevue Literary Press in January. A new novel, All Back Full, will be published by Dzanc Books in early 2017. He teaches at The New School, Pratt Institute, Columbia University, and the Solstice Low-Res MFA Program of Pine Manor College.

Join us for the next installment of our weekly highbrow variety show which gathers together a handful of the finest minds in literature, criticism, journalism, music, theater, film, sports, television, art, and beyond for a series of short talks. Sara Majka will discuss cities she's never lived in with Brigid Hughes, former editor of The Paris Review and current editor of A Public Space. Then, Hannah Tennant-Moore will discuss her debut novel, Wreck and Order, with Teju Cole. The evening will also include live music fromWyatt Mason, Vic Rawlings, and Lexy Benaim.

Join Handwritten at Pen + Brush for an evening of wine and weirdness, as we dive into worlds of digital ontologies, vocalization and myths, performance and hybridity, sequence and shapes, and renegade poetics. Moderated by Sarah Madges, we invite you to hear from a list of ebullient minds: LB Thompson, Evie Shockley, Elizabeth Guthrie, LaTasha Nevada Diggs, and Buffy Cain.

Homero Aridjis and Chloe Aridjis In Conversation with Alberto Manguel

Please join 192 Books for a conversation with celebrated Mexican poet and environmental activist Homero Aridjis and his daughter the novelist and translator Chloe Aridjis. Moderating will be Alberto Manguel, acclaimed anthologist, translator, essayist, novelist, and editor. They will speak about THE CHILD POET, a dream memoir written by Homero Aridjis which animates long-forgotten memories of his childhood that imminent fatherhood helped to uncover. Told in a series of interconnected vignettes, THE CHILD POET provides a portrait of Aridjis in his pre-poet years, at a time when each day in his native Contepec, Michoacán formed part of a personal mythology. The work was of particular significance to translator Chloe Aridjis as it gave her insight into her father’s childhood and the beginning of his life as a poet, which would have otherwise been inaccessible.

Pass the Mic with Sunil Yapa

Join us for Pass the Mic with Sunil Yapa, author of Your Heart Is a Muscle the Size of a Fist. Yapa’s debut novel revolves around an intense, heartbreaking day of protests that changes the lives of seven unforgettable characters. Yapa will be joined by Mic staff writer Natasha Noman for a conversation about the novel and what past events reveal about current hopes and ideas for protest, power and change. There will also be an opportunity for the audience to ask questions.