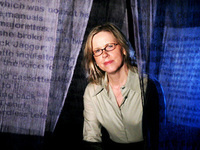 Susan Wheeler is the author of several books of poetry and the novel Record Palace (Graywolf, 2005). Her first collection, Bag ‘o’ Diamonds (University of Georgia Press, 1993), was chosen by James Tate to receive the Norma Farber First Book Award from the Poetry Society of America. Her other collections are Smokes (Four Way Books, 1998), Source Codes (Salt, 2001), Ledger (University of Iowa Press, 2005), and Assorted Poems (Farrar, Straus and Giroux, 2009), which includes poems from her first four books, and Meme (Iowa, 2012). Her poems have appeared in eight editions of the The Best American Poetry series, as well as The Paris Review, New American Writing, Talisman, The New Yorker and many other journals. Wheeler’s awards include the Witter Bynner Prize for Poetry from the American Academy of Arts & Letters, and fellowships from the John Simon Guggenheim Foundation and the New York Foundation for the Arts. Wheeler has taught at The New School,  the University of Iowa, NYU, Rutgers, and Columbia University, and is currently on the Creative Writing faculty at Princeton University. 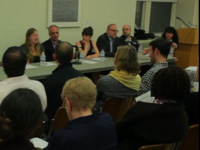 Join literary matchmaker Susan Shapiro in conversation with editors of top online magazines and newspaper sections to discuss how to publish your writing online.

Moderated by New School journalism professor Susan Shapiro, bestselling author of 10 books including What's Never Said, Unhooked, The Bosnia List, and Only As Good As Your Word.

Sponsored by the Creative Writing Program. 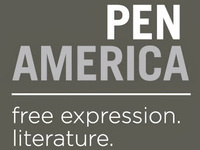 Please note this event will now be held at Dixon Place.

Carmen Boullosa is a Mexican novelist, poet, essayist, and playwright. A Guggenheim, Cullman, and FONCA fellow, her most recent books are Texas: The Great Theft, and (with Mike Wallace) A Narco History. The NY Public Library owns a collection of her art books. She has taught at NYU, Columbia, CUNY, and Georgetown. Her CUNY TV show, Neuvo York, has won five NY Emmys.

Valeria Luiselli was born in Mexico City and grew up in South Africa. A novelist (Faces in the Crowd and The Story of My Teeth) and essayist (Sidewalks), her work has been translated into many languages. She is the recipient of The Los Angeles Times Art Seidenbaum Award for First Fiction and the National Book Foundation’s 5 Under 35 award.

Guadalupe Nettel is a Mexican writer. Her works include Natural Histories and The Body Where I Was Born. She was a finalist for the 2016 Neustadt Prize, and she has been translated into more than ten languages. Nettel has won many awards, including the Premio Herralde.

Cristina Rivera-Garza is an award-winning author of novels, short stories, poetry, and nonfiction. Her works have been translated into multiple languages and she is a translator herself. The recipient of the Roger Caillois Award for Latin American Literature, and the Anna Seghers Prize, she is the only author who has won the International Sor Juana Inés de la Cruz Prize twice.

Mónica de la Torre writes about art and culture for publications in Mexico and the United States and is the author of the poetry books Talk Shows andAcufenos. She is co-author of the artist bookAppendices, Illustrations & Notes, available on Ubu.com, and co-editor of the anthology Reversible Monuments: Contemporary Mexican Poetry, with Michael Wiegers. She translated the books Poems by Gerardo Deniz and Mauve Sea-Orchids, by Lila Zemborain. She is senior editor at BOMB Magazine and lives in Brooklyn.

Sponsored by The Creative Writing Program and PEN American Center.

On the occasion of the PEN World Voices Festival focusing on Mexico, McNally's mexican literary feast!

Famed visual artist Gabriel Orozco often utilizes everyday objects to re-contextualize and challenge notions of reality. The artist is joined by celebrated author and Festival Chair Colm Tóibín (whose latest book, On Elizabeth Bishop, is nominated for a 2016 National Book Award), to discuss Orozco’s brilliant and insightful work, and its relationship to Mexico’s current artistic and cultural movements.

A conversation with writer and poet Saeed Jones will follow the lecture.

Hosted by The Cooper Union Office of Continuing Education and Public Programs.