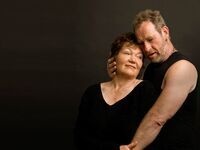 Writing and Thinking About the Critical Essay: Tina Packer and Nigel Gore

Tina Packer will talk about Women of Will, her book about women in Shakespeare, performing scenes from the plays with her fellow actor Nigel Gore.

Tina Packer, one of the world’s leading authorities on Shakespeare’s work, is the founding artistic director of Shakespeare & Company in Lenox, Massachusetts. She is an actress, playwright, and author. Her book isWomen of Will: Following The Feminine in Shakespeare’s Plays.

Nigel Gore received the Eliot Norton Award for Outstanding Actor for his portrayal of George in Who’s Afraid of Virginia Woolf? at the Publick Theatre in Boston. Recent work includes Richard in Richard III at Colorado Shakespeare Festival; Squeers, Hawke in Nicholas Nickleby at Lyric Stage Boston (Eliot Norton Outstanding actor nomination); Claudius in Hamlet at Prague Shakespeare Festival; Volumnia in Coriolanus at the Mercury Theatre, Colchester, UK; Mark Antony in Antony and Cleopatra; Sir Toby Belch in Twelfth Night (both with Shakespeare & Co.). Film: Last Knights. TV: seasons two and three of Brotherhood on Showtime. Mr. Gore is a founding member of AUREA, a performance ensemble whose mission is to explore the relationship between music and the spoken word. He is a published poet.

Sponsored by The Creative Writing Department.

Please join The School of Writing for a discussion on diversity in the Writing for Children/ Young Adult genre. With Una LaMarche  and Daniel José Older. Moderated by Sona Charaipotra and Dhonielle Clayton.

Sona Charaipotra is a journalist and author who’s written for everyone from the New York Times to Teen Vogue. The co-founder of CAKE Literary, a boutique book packaging company with a decidedly diverse bent, she spends much of her time poking plot holes in TV shows like The Vampire Diaries and Pretty Little Liars — for work of course. She’s the co-author of the dance drama Tiny Pretty Things and its sequel Shiny Broken Pieces, due July 12 from HarperTeen. She also blogs about books and authors for sites like Parade.com and the Barnes & Noble Teen blog. Find her on the web at SonaCharaipotra.com, or on Twitter @sona_c

Dhonielle Clayton is COO and Sr. VP of Librarian Services for the We Need Diverse Books non-profit. She spent most of her childhood under her grandmother’s table with a stack of books. She hails from the Washington, D.C. suburbs on the Maryland side. She has an MA in Children’s Literature from Hollins University and an MFA in Writing for Children from the esteemed New School program. She taught secondary school for several years, and is a former middle school librarian. She is the co-founder of CAKE Literary, a packaging company whipping up decadent — and decidedly diverse — literary confections for middle grade, young adult, and women’s fiction readers. Her debut novel Tiny Pretty Things with Sona Charaipotra (HarperTeen, 2015) came out last year, and the sequel Shiny Broken Pieces hits shelves July (HarperTeen, 2016). Her YA fantasy series The Belles is coming out soon (Disney/Hyperion, 2017).

Una LaMarche is the author of two young adult novels, Five Summers and Like No Other, and Unabrow: Misadventures of a Late Bloomer, a collection of humor essays based on some of her more questionable life choices. She is also a contributing writer for The New York Observer and The Huffington Post, and blogs at The Sassy Curmudgeon. Una lives in Brooklyn with her husband and son.

Daniel José Older is the author of the Bone Street Rumba urban fantasy series from Penguin's Roc Books and the Young Adult novel Shadowshaper (Scholastic's Arthur A. Levine Books, 2015), which was nominated for the Kirkus Prize in Young Readers' Literature. His first collection of short stories, Salsa Nocturna and the Locus and World Fantasy nominated anthology Long Hidden: Speculative Fiction from the Margins of History, which he co-edited, are available from Crossed Genres Publications. You can find Daniel's thoughts on writing, read dispatches from his decade-long career as an NYC paramedic and hear his music at ghoststar. Please visit his website: http://ghoststar.net/

Every year, the National Book Critics Circle presents awards for the finest books published in English in the categories of Fiction, General Nonfiction, Biography, Autobiography, Poetry, and Criticism. On Wednesday, March 16, finalists will read from their work (awards will be presented on Thursday, March 17).

Co-sponsored by The Creative Writing Program and the National Books Critics Circle.

Women of the World Poetry Slam is a performance poetry tournament designed for individual competition, where poets will perform four poems of varying lengths during preliminary bouts. The top poets will go on to finals to compete for the title of, The 2016 Women of the World Champion! Events will be held from Wednesday, March 9 to Saturday, March 12th.

Mark Greif is Associate Professor of Literary Studies at the New School in New York, in its Eugene Lang College. He holds degrees from Harvard and Oxford, and received his PhD in American Studies at Yale. He is a founder of the journal n+1, and writes for general interest publications in the United States and Europe. His scholarly book The Age of the Crisis of Man: Thought and Fiction in America, 1933-1973 (Princeton) appeared in 2015. A collection of his essays will appear as Against Everything (Pantheon) in September 2016.

This seminar brings together students, faculty and the public for an informal seminar on the development of the essay as a literary and social form. RSVP REQUIRED: please email tharlin@gradcenter.cuny.edu if you are interested in attending and for advanced readings.

Say Yes, a collective of creators in New York, presents a thrilling variety show including music, poetry, dance, comedy, and an all-around good time. Our stage is diverse and creates space for all kinds of artists. We're all about inclusion, positivity, and saying YES! Come get involved.

The Poetry Brothel is mad as a hatter and march as a hare! Uummm, I mean, we're march it's the matter and mad unaware. Wait, no, we're tipsy with slumber and stone simple cares! I mean, there's a Poetry Brothel Party, and it's called The March Hare!
Come go mad with us, darlings. Bring your pocket watches, your straight jackets, and your dreamiest elixers. We'll bring Foxx Von Tempt and Cassandra Rosebeetle to dance into your hearts, Sweet Megg and The Wayfarers to croon into your ears, and a gaggle of poets to whisper to your souls, including honored guest reader, the illustrious Sharon Mesmer.

This OPEN MIC SHOW opens its caffeinated doors for a 30 minute workshop. A ten dollar charge toward food or drink will be collected at the door in exchange for a food/drink ticket.

Participants will be given creative prompts.  Following the workshop, any and all other poetic/literature/prose/nonfiction writer enthusiasts, singers, songwriters, rappers, acoustic guitar players and slam poet peeps! can signup for the 15 slot open mic!

Each person will have 5 minutes to read one of their brand new workshop creations or another piece they have ready.

Aida Zilelian is a New York writer and English teacher. Her debut novel The Legacy of Lost Things was released in March 2015 (Bleeding Heart Publications) and was the recipient of the 2014 Tololyan Literary Award. Her work has been published in several anthologies and over twenty-five literary journals including Per Contra, Red Fez, Wilderness House Literary Review, Theurgy and others. She has read her work at various reading series’ in Queens and Manhattan including Sunday Salon, Phoenix Reading Series, Gartal, Rez Reading Series, Oh, Bernice!, and First Tuesdays. She is the curator of Boundless Tales, a reading series in Queens, NY. In 2011 her first novel THE HOLLOWING MOON was one of the four semi-finalists of the Anderbo Novel Contest.. She is currently working on her third novel.

Gabriel Don received her MFA in creative writing at The New School, where she served as Reading Series Coordinator and Chapbook Competition Coordinator. Born in Australia, she grew up in the Middle East and Singapore, and is presently based in New York City. She teaches writing at BMCC, City University of New York and has published fiction, nonfiction and poetry. Gabriel’s work has appeared in The Brooklyn Rail, The Sydney Morning Herald, The Understanding Between Foxes and Light, A Minor, Westerly, Mascara Literary Review, The Legendary, Transtierros (translated into Spanish), LiveMag!, Gargoyle 62, 12, and Three Rooms Press MAINTENANT 9. She’s currently working on a book based on interviews with female authors. She’s read at KGB, Nuyorican Cafe, The New York City Poetry Festival, Gaslight and others. She’s appeared in the visual poems Unbound and Woman Without Umbrella, originated several reading-soiree series, editor on publication LIT and has received press for her writing Quiet Lunch, Let Them Talk, Art Loves Her, Yes Poetry!, and Great Weather for Media.

Gabriel Don received her MFA in creative writing at The New School, where she worked as the Reading Series and Chapbook Competition Coordinator. Her writing has appeared in The Brooklyn Rail, The Sydney Morning Herald, Westerly, Mascara Literary Review, Transtierros (translated into Spanish), Gargoyle 62, LiveMag! 12, Gainsayer and Three Rooms Press MAINTENANT 9. She currently teaches writing at BMCC.

Kevin Marquez: Kevin Marquez was born and raised on the Lower East Side in Manhattan, the prime location that has inspired his writing. He attended City College where he fell in love with poetry while earning his MFA in creative writing. He now resides in Queens where he teaches English to immigrant students from all around the globe. Buy his Brand New BOOK: Toward The Question Mark on Amazon through this Link.